This time of year, some people go pumpkin crazy. I’ll admit that I do like pumpkin — from pie and other desserts to beer.

I’m not so sure about other pumpkin items these days, like cereals, cosmetics (pumpkin spice lip gloss, anyone?) and beyond. This love affair with a tough, orange squash is definitely big business for farmers.

Several states produce pumpkins on a commercial scale, but most of the production is centered in six states: Illinois, California, Ohio, Pennsylvania, Michigan and New York. Just those six states produced 754 million pounds of pumpkin in 2015 at a value of $90 million (the going wholesale farm rate for pumpkin last year was 12 cents per pound).

That doesn’t even count the products sold that are artificially pumpkin flavored (including most of the food-like products on the shelves).

Some of our pumpkin consumption is purely ornamental — pumpkins to decorate our porches and to carve into spooky or cute characters (more on that in a bit), but 80 percent of the crop grown in the United States is meant for processing into canned pumpkin, manufactured pumpkin foods and more. So only 20 percent of the annual crop doesn’t go into the food system.

You may have heard the rumor that the canned pumpkin you buy at the store is, in fact, not pumpkin at all but a mix of different squashes including butternut squash. Could it be true?

Well, it is neither really all that true nor completely false. It is true that the field pumpkins grown for commercial processing are not the pumpkins you are used to seeing. They’re a less photogenic variety.

They aren’t jack-o’-lantern pumpkins or pie pumpkins. They are called Dickinson pumpkins, and most of them are a cultivar produced specifically for processing by the Libby’s company called Libby’s Select. (Libby’s, by the way, processes 85 percent of the pumpkin used worldwide.) The confusion comes from the fact that the lines are often blurred between different types and species of squash, including pumpkins.

Most of the pumpkins we are used to belong to the species Cucurbita pepo, along with some other things that look or taste nothing like a pumpkin, such as zucchini and spaghetti squash.

The Dickinson pumpkin used for processing is part of the C. moschata species, which also includes butternut squash along with other pumpkins such as a flat, light-skinned pumpkin called a cheese pumpkin.

Just to add to the confusion, there’s another species, C. maxima, where those giant pumpkins come from.

What’s up with carved pumpkins?

So if we clearly have a love affair with eating pumpkins, why do we use 20 percent of the crop for purely decorative purposes? Especially the ones we cut up and display on our porches?

Aside from the pumpkin’s aesthetically pleasing appearance and connection to autumn, there is a story behind why we turn pumpkins into jack-o’-lanterns.

Of course, the story doesn’t start with pumpkins, but with something a little more lowly: the turnip. Early jack-o’-lanterns in Ireland from centuries ago were carved out of large turnips or even potatoes. Beets were used in England.

It wasn’t until settlers came to the Americas and were introduced to the pumpkin that the jack-o’-lantern took on its modern squashy identity.

But why do we call them jack-o’-lanterns in the first place? The name hearkens back to an Irish folk tale about a man named Stingy (cheap) Jack. This Stingy Jack invited the devil to have a drink with him at the pub, and when it came time to pay, Jack convinced the devil to turn himself into a coin to pay the bill.

Jack then shoved the coin in his pocket next to a crucifix and kept it trapped for a year until the devil promised it would not bother Jack for a whole year or claim his soul if he died.

Exactly one year later, the devil came back and, once again, Stingy Jack tricked it. This time, Jack had the devil climb a tree to pick fruit.

While the devil was in the tree, Jack carved a cross in the bark of the tree, thus trapping it in the tree. This time, Jack got the devil to promise to leave him alone and not claim his soul for 10 years.

In those 10 years, ol’ Stingy Jack did finally die. God refused to allow such an unsavory character to enter heaven, and the devil wanted nothing to do with Jack after all the trouble he had been through.

So the devil turned Jack away from hell, sending him into the darkness with only a hot coal to light his way. Jack carved a turnip into a lantern to hold his coal, which lights his way as he is forced to roam the earth for eternity with only his coal for comfort.

The Irish called the ghostly figure of the tormented man and his turnip lantern “Jack of the Lantern,” which has shortened to jack-o’-lantern.

For centuries now, people have been carving jack-o’-lanterns out of innocent vegetables (and fruits) to ward away Stingy Jack and all manner of evil creatures of the night.

Jack-o’-lanterns are especially important on Halloween, when the shroud between the lands of the living and dead allow the dead to roam the earth. So be sure you have your carved pumpkin, or turnip, ready on All Hallows Eve.

There are so many pumpkin-y things at the market/store, what should I buy?

If you want to go to the store or farmers market and pick up the real deal, you may have more choices than you know how to deal with when it comes to pumpkin varieties. So here’s a quick list of common pumpkins (and relatives) you may find at the market.

The jack-o’-lantern is the standard pumpkin most everyone will identify with this time of year. These pumpkins are generally medium sized and are good for decorating and carving.

While they are OK for cooking, they don’t have the best flavor or texture for many dishes. If your pumpkin pursuits are purely culinary, stick to another variety. If you want to use them for decoration then cook them (or eat the seeds) afterward, these are fine.

The pie pumpkin is a small, round pumpkin that has a much creamier flesh and a much better flavor than the jack-o’-lantern varieties. Their small size means they aren’t great for carving, though.

You can cut these pumpkins up and cook them, but it is easier to just cut them into halves and roast (or perhaps steam) to get the flesh ready for dishes. The smaller ones are the perfect size to roast whole with brown sugar, butter and cinnamon, use as a pumpkin soup bowl, or stuff and bake.

Fairytale pumpkins are becoming more visible at farmers markets these days. These squat, almost flat pumpkins have a light-orange or tan rind color. Sometimes, you’ll find them covered with warts (a common pumpkin genetic trait). The outer rind is hard to cut into, but the creamy flesh and small seed cavity mean they can be pretty tasty.

The rouge vif d’Etampes is a red heirloom pumpkin from 1800s France. It has a color between orange and red. Most are medium sized, but they can grow large. They have a creamy, sweet texture that is good for many dishes.

Giant pumpkins are those massive pumpkins you often see on TV and at festivals. While the size may be impressive, the flavor definitely isn’t. The bigger the pumpkin, usually the grainier and less flavorful the flesh.

On the other end of the size spectrum are mini, or Jack Be Little pumpkins.  These petite pumpkins are actually a type of acorn squash.  While they may be used mostly for decorative purposes, they are indeed tasty.  You can cut open the top (jack o’lantern style) and scoop out the seeds and roast them for an individual sized portion.  They’re good stuffed or used for a small serving of soup.

There are lots of other squashes that aren’t pumpkins that make great decor and taste wonderful. Delicata, with its small size and sweet flavor is one of my favorites. Acorn, hubbard, butternut, spaghetti and cushaw are all great squashes. In fact, cushaw, the odd white and green (sometimes orange) striped squash, probably makes a better pie than pumpkin does (or so my mother says) 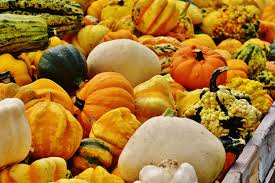 Gourds: these are the strictly ornamental side of the family. Most gourds are either too hard or too flavorless to be good eating. They are prized for their interesting shapes and colors, but they typically won’t win any culinary prizes.

Urban Agriculture Program Coordinator at Nebraska Extension
John Porter is the Urban Ag Program Coordinator for Nebraska Extension and Nebraska College of Technical Agriculture, serving both as an extension educator and professor of urban agriculture. He specializes in urban agriculture and horticulture, especially in the areas of vegetable and fruit production for home gardens and urban farms and edible landscaping.

This site uses Akismet to reduce spam. Learn how your comment data is processed.